Greater Toronto: What Are the Business Costs of Fires & Fines?

Businesses in the Greater Toronto Area should be aware of shifting currents in Ontario Fire Code enforcement that increase their likelihood of exposure to fire-related costs. More often, these include not only risk of fire damage, business interruption and replacement costs, but also risk of fines for non-compliance. The fines themselves are in business-impeding amounts that far outshadow what it would have cost to comply with Fire Code in the first place. 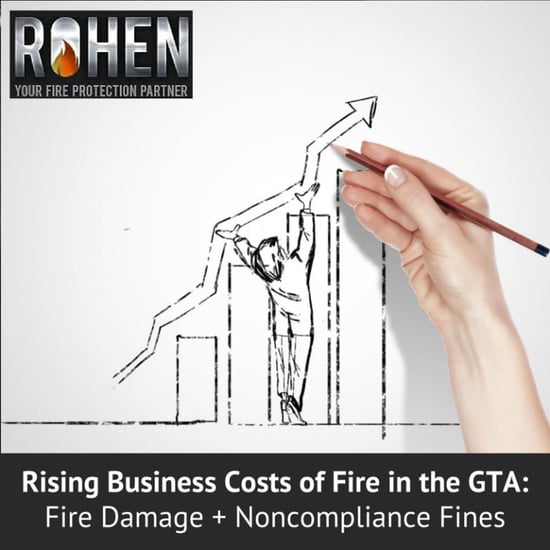 No working smoke alarms? $100,000 for corporations in Ontario

Ontario law requires working smoke alarms on every storey of a home and outside all sleeping areas. Not having working smoke alarms can result in fines up to $50,000 for individuals and $100,000 for corporations. Often an additional victim fine surcharge is applied, as well as court costs. Where multiple owners are involved, the fines can be applied to each of them (i.e. two owners = 2x fines). In the worst cases, offenders are subject to incarceration periods of 20 days to 3 years. That doesn’t include costs of actually bringing buildings up to code to be in compliance. Where they are unable to do so, owners risk having their businesses shut down, and/or accruing additional daily fines of as much as $20,000.

Here at Rohen Fire, we follow the Fire News Bulletin published by the Ontario Ministry of Community Safety & Correctional Services, which compiles regional news on fires and fire code violations, as well as other sources. While we never intended to compile a comprehensive list of fines and fires, we do often pick up on news coverage of fire damage and costs of non-compliance, which we share on social media. We recently audited our social media coverage of these events to see if any interesting trends emerged.

One of the things that is clear in article after article across multiple media outlets, when municipal fire authorities are interviewed, they consistently refer to “zero tolerance,” and “sending a message.” As regional fire authorities confirm in this Barrie Examiner article, the push for zero tolerance and fire compliance through legal channels is coming from the top, at the Ontario Fire Marshal's office.

If you are not yet compliant with Fire Code, get on it now!

We analyzed the stories that we have tracked, but bear in mind this analysis should be kept in perspective. Our tracking is far from comprehensive, and the media coverage (and our ability to keep up with it) hasn't necessarily been consistent. Generally, fire events with more significant damage tend to be more newsworthy and share-worthy, so the events we have tracked here skew towards larger fines, larger fires, and fires impacting businesses or organizations versus single-family homes. 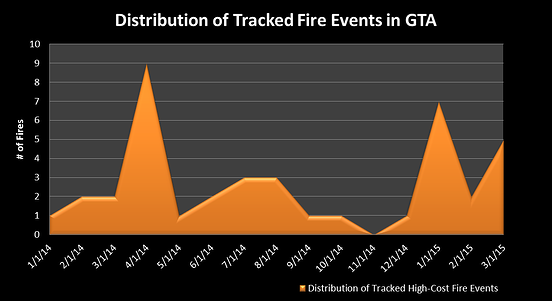 What types of businesses were most likely to be impacted by these higher-cost, high-visibility fires? 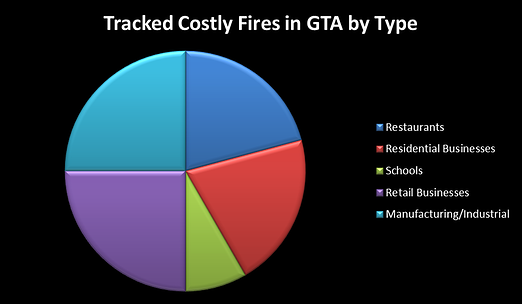 Of tracked events with Fire Code violation fines, what types of businesses were involved?

Of tracked fines, what instigated the attention?

What we know about the costs of these higher-profile noncompliance cases: 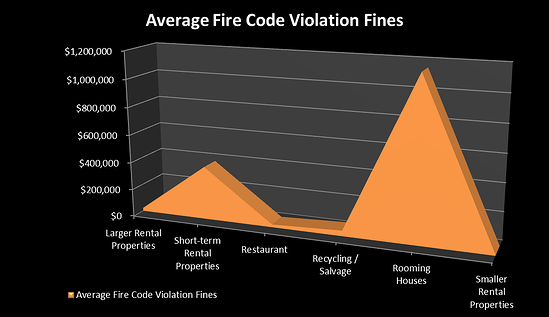 We did not break the tracked violation fines down over time as the media coverage of fire code violations often occurs closer to a court date rather than the date of the actual violation, so it wouldn't likely shed light on any periods of greater enforcement.

Download the full list of tracked events attesting to the high costs of fire in the GTA in this pdf summary.

Was any of this surprising to you? Let us know what you think in the comments.

You may also be interested in these related posts: